Japan, Brazil, and London, among others, sent TV crews to cover the NYC event. ABC World News fed segments across the US…and the world. Media exposure from the U.S. event alone exceeded a value of more than $5,230,000, with more than 20,000 signatures from fans, celebrities, government officials and media personalities. 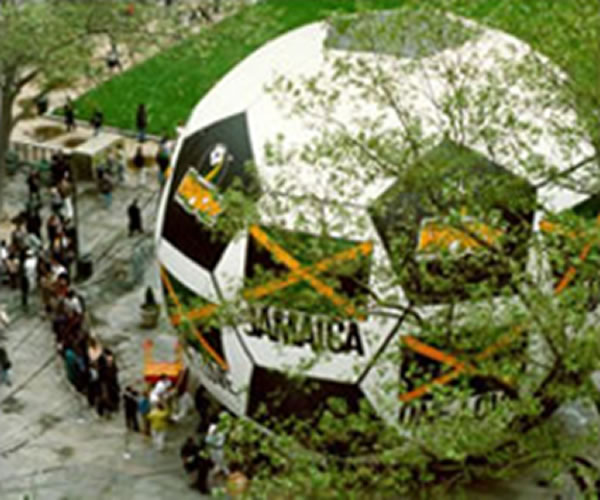 History was made in Jamaica when their beloved soccer team, the Reggae Boyz, made it to the World Cup. To engender good-will and positive media exposure for the team as they made their way to France, we conceived, designed and commissioned a giant inflatable soccer ball – 26 ft. high, 50 ft. in diameter – to serve as a larger than life “bon voyage” card.

On route, fans signed their well wishes on giant removable hexagonal panels. The Ball debuted in New York City before moving on to Kingston, London and Paris where it was on display for the duration of the games. The giant ball kick off was staged in NYC’s Bryant Park. Media coverage, despite rain downpours, was non-stop beginning with Al Roker, NBC-TV Today Show weatherman, as the first to sign a panel live on air. From ABC World News and CNN, the Wall Street Journal and the New York Times, the U.S. was saturated with news of the event.